skip to main | skip to sidebar

Here's a fantastic blog that I think any reader of Stalking Duppi will appreciate: HABIT OF SEX, run by nattliga_toner (who modestly did not advertise in his post of Yoran's "Montparnasse"). H.O.S. specializes in the darker, gothier sectors of Japanese underground music, featuring releases on cult labels like Wechselbalg, and even some early visual-kei. Especially check out his post of Funeral Party's "Embryo" 7" -- mind-melting stuff!

Also, nattliga_toner and I will periodically be doing guest posts on each others sites. We've already exchanged 2 Yoran singles, and there are many good things to follow.
Posted by c.patera at 11:43 PM No comments: 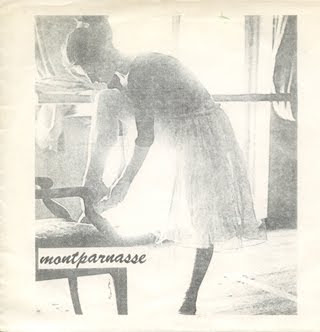 Side B
Montparnasse
La Bou.....

First of all, I would like to express my sincere gratitude for being given the privilege to post on this very fine blog. I'll try to make my posts here as worthwhile as my record collection and writing abilities allow!


This is the first solo output by Yoran, released shortly after his stint as a bassist with punk rockers Laughin' Nose. Released on Naoto Hayashis legendary Unbalance label (famous for putting out Hijokaidans first album, among other things, during its brief existence) in 1981, this very singular EP is a far cry from both his previous and subsequent musical efforts.

The tracks contained here are comprised of cut-up and collaged recordings from various unspecified french movies intertwined with the occasional spoken word segments - all seemingly recorded using a cheap-o cassette player making for quite the lo-fi work. Nevertheless, "Montparnasse" harbors a very intriguing surreal atmosphere - just check out the later part of "Concert Maillol" with it's haunting looped piano, indistinct sound samples and Yorans bizarre hummings, mumblings and fumblings (of the tape recorder). I think this would sit well as the soundtrack to any fever dream.

Another favorite is the melancholic and paranoid title track and the ethereal dialogue-ladden murkiness of "Je Derve Avec Láir", but reviews of individual tracks feel pointless as this is definitely meant to be consumed whole. For maximum impact; play this very late at night.

"Montparnasse" was followed up by two more singles (of a totally different nature, I should add) before Yoran temporarily disappeared from the music scene. He later reemerged as a trance DJ under the moniker Yoji Biomehanika and regularly plays at raves all over the world. Nevertheless, I'd say that his main musical legacy lie within the three singles he put out in the early eighties.

Again, I'd wish to give my thanks for being granted to post here on Stalking Duppi, and I sincerely hope you'll all enjoy this outlandish little EP.

Side A
S.P.I.Ritual
Optical Illusion

Side B
Oratorio
Animal Language

As far as I know, this is the only recording from "The Gurdjieff" outside of their/his/her appearance on the "Individual Music Osaka" cassette book released by Yuzuru Agi after the dissolution of Vanity Records. Released on the very odd Night Gallery label (run by guitarist of Auschwitz, I think), that also released Yoran, Duppi, and others before switching entirely to heavy metal. A strange trajectory...

The Gurdjieff is especially bizarre, skirting the line between morose minimal synth and all-out electro-industrial noise. The phrase "Maurizio Bianchi in Dracula's castle" is strangely applicable. Back cover has "THANKS TO NORMAL•B" printed underneath the song titles. I wasn't sure if that was a direct reference to Normal Brain (from Vanity Records) until I noticed a Texas Instruments Speak & Spell buried in the mix on "Oratorio". Not to be missed. Enjoy!